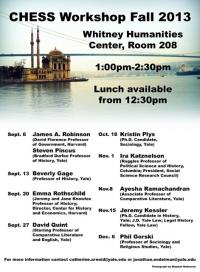 Lunch available from 12:30pm
(click on highlighted names for bio)

“Deep Throat, Watergate, and the Bureaucratic Politics of the FBI”

Beverly Gage is professor of 20th century United States History and Director of Undergraduate Studies at Yale University. She has been teaching at Yale since the fall of 2004. Her research interests centers on the evolution of American political ideologies and institutions and teaches courses on terrorism, communism, American conservatism, and 20th century American politics. In 2009, Professor Gage received the Sarai Ribicoff Award for teaching excellence in Yale College.

Professor Gage attended Yale University for her undergraduate degree and earned her PhD from Columbia University in History in 2003. Her dissertation received the Bancroft dissertation award for best U.S. history dissertation. Her first book, The Day Wall Street Exploded: A Story of America in its First Age of Terror, deals with the topic of American terrorism in the late 19th and early 20th century in the form of the 1920 Wall Street explosion, an unsolved terrorist attack that killed 39 people in New York’s financial district. Her next book, entitled G-man: J. Edgar Hoover and the American Century will be a biography of former FBI director J. Edgar Hoover.

In addition to her research and teaching, Professor Gage has written for numerous national magazines and journals, including the Journal of American History, the American Historical Review, Washington Post, The Nation, the New York Times, and Slate. She has been interviewed by NPR and by Jim Lehr in his program The News Hour on PBS.

Philip Gorski is Professor of Sociology at Yale University. He is also Co-Director of Yale’s Center of Comparative Research and co-convener of the Religion and Politics Colloquium at Yale’s MacMillan Center. Professor Gorski was previously Professor of Sociology at the University of Wisconsin, Madison. Gorski’s empirical work focuses on topics including state-formation, nationalism, revolution, economic development and secularization. He is also interested in the philosophy and methodology of the social sciences and the nature and role of rationality in social life. His recent publications include The Disciplinary Revolution: Calvinism and the Growth of State Power in Early Modern Europe (2003) and Max Weber’s Economy and Society: A Critical Companion (2004), which he edited with Charles Camic and David Trubek.

Ira Katznelson is Ruggles Professor of Political Science and History at Columbia University.  He is also President of the Social Science Research Council and a Fellow of the American Academy of Arts and Sciences and the American Philosophical Society. Before returning to Columbia in 1994, Professor Katznelson taught at the University of Chicago, where he chaired the political science department from 1979 to 1982, and at the Graduate Faculty of the New School for Social Research, where he was dean from 1983 to 1989. He was a Guggenheim Fellow in 2001. He has previously served as President of the American Political Science Association, as President of the Social Science History Association, and as Chair of the Russell Sage Foundation Board of Trustees.  Professor Katznelson’s work has combined comparative politics and political theory with political and social history. His most recent books include Fear Itself: The New Deal and the Origins of Our Time, Liberal Beginnings: Making a Republic for the Moderns (with Andreas Kalyvas), and When Affirmative Action Was White: An Untold History of Racial Inequality in Twentieth-Century America. Among his many other books and articles are Black Men, White Cities: Race, Politics and Migration in the United States, 1900-1930, and Britain, 1948-1968; Preferences and Situations: Points of Intersection Between Historical and Rational Choice Institutionalism (with Barry Weingast); and Religion and Democracy in the United States: Danger or Opportunity? (with Alan Wolfe). He is currently completing Liberal Reason, a collection of his essays on the character of modern social knowledge.

Jeremy Kessler is a current PhD candidate in Legal History at Yale University. In 2013 he received his JD from Yale Law School, where he was a Legal History Fellow and Executive editor of the Yale Journal of Law and Humanities.  He is a Tikvah Scholar-in-Residence and a David Berg Foundation Scholar Academic for 2013-2014 at New York University. He is also a Graduate Fellow at Cardozo Law School. He has received an M. Phil. in History and Philosophy of Science from the University of Cambridge and holds a B.A. summa cum laude from Yale College. He is also a Middleton Fellow in Presidential studies at the Lyndon B. Johnson Presidential Library. His recent article “The Invention of a Human Right: Conscientious Objection at the United Nations 1947-2011” has appeared in the Columbia Human Rights Law Review. He has also written for The New Atlantic, The New Republic, n+1 and Bookforum.

Jeremy’s research focuses on the legal history of conscientious objection in the United States. His dissertation focuses on the complex negotiations through which executive officials, private lawyers, federal judges, and social movement activists have managed to deal with those who refuse to fight in warfare from WWI to the present day.  In the process, these individuals used military manpower policy to shape the meaning of public power and private right and contributed to the construction of a boundary between civil society and the administrative state. He is also interested in international history, military history, religious history and the history of human rights.  He also plans to focus on Fleix Frankfurter’s campaign for peacetime conscription in the 1930s and his defense of the rights of conscience.

Steve Pincus is Bradford Durfee Professor of History at Yale University.  At Yale he is also the Co-Director of CHESS and a co-convener of British Historical Studies Colloquium. In 2010-2011 Professor Pincus was Visiting Fellow at All Souls College, Oxford. He was previously Professor of History at the University of Chicago. His research interests include the origins of the British empire, early modern state formation, comparative revolutions, and the history of economic thought. Among his many publications are Protestantism and Patriotism: Ideologies and the Making of English Foreign Policy, 1650-1668 (1996) and, most recently, 1688: The First Modern Revolution (2009).

Kristin Plys is a PhD candidate in Sociology at Yale University. Last academic year, she was a visiting researcher in the Economics Department at the Centre for Development Studies in Thiruvanathapuram, and the Fox International Fellow at Jawaharlal Nehru University, New Delhi with a joint affiliation to the Centre for the Study of Social Systems and the Centre for Historical Studies. Before coming to Yale, she was a Research Fellow in the Economics Department and the Woodrow Wilson School of Public and International Affairs at Princeton University. She has a BA in Cross-National Sociology and International Development from the Johns Hopkins University. Her research interests include political economy, development, labor, comparative and historical sociology, and the Global South. Her recent publications include an opinion piece on the prevalence of rape in Delhi NCR, co-authored with Vani Kulkarni, and an article entitled, “World Systemic and Kondratieff Cycles”.

“Uneasy Riders: Some Literary Modernists and the Aristocracy”

David Quint is Sterling Professor of Comparative Literature and English at Yale University. He is also the chair of Yale’s Renaissance Studies Graduate Program. Professor Quint’s research interests include classical and Renaissance heroic poetry and their influence on Milton and Spenser, Renaissance drama, and the literature and legacy of humanism. He is particularly interested in the larger cultural meanings vested in literary and generic forms. Professor Quint’s publications include Origin and Originality in Renaissance Literature (1983); Epic and Empire (1993); and Montaigne and the Quality of Mercy (1998).  He has also translated The Stanze of Poliziano (1978) and Ariosto’s Cinque Canti (1996).

Ayesha Ramachandran received her BA from Smith College (2001) and her PhD with distinction in English and Renaissance Studies from Yale University (2008). She received the Prize Teaching Fellowship for Outstanding undergraduate teaching in 2008 and the Isabel McCaffrey Prize in 2010. She was an Assistant Professor of English and affiliated with the Department of Cultural Analysis from 2008-2013 and is currently an Associate Professor of Comparative Literature at Yale. Her research and teaching focus on the literature and culture of the sixteenth and seventeenth centuries, primarily on Europe’s relations with an expanding world. She is currently working on a book-length study, “The World-Makers: Global Imagining in Early Modern Europe,” which explores the reshaping of the concept “world” and its implications for theories of modernity across a range of disciplines. She has published articles on Spenser, Lucretius, Tasso, Petrarch, Montaigne and on postcolonial drama. She was awarded a Junior Fellowship at the Harvard Society of Fellows in 2007.

James Robinson is David Florence Professor of Government at Harvard University and a faculty associate at the Institute for Quantitative Social Science and the Weatherhead Center for International Affairs.  Before moving to Harvard he was a Professor in the Departments of Economics and Political Science at the University of California at Berkeley. He has also previously taught in the Department of Economics at the University of Melbourne and the University of Southern California. Professor Robinson’s work focuses on comparative long-term economic and political development with a particular interest in Latin America and Sub-Saharan Africa.  Among his numerous publications, Robinson has coauthored Economic Origins of Dictatorship and Democracy with Daron Acemoglu (2006); Natural Experiments of History with Jared Diamond (2010); and, most recently, Why Nations Fail: The Origins of Power, Prosperity and Poverty with Daron Acemoglu (2012).